The Start Of It All

Rosemere Tavern is located in the Rose Village area of Vancouver Washington. The Tavern was established in 1937 and purchased by Bob Trimbo in 1968. The Tavern was across the street from the service station Trimbo owned.  Over the years,  many of his grandkids would stop by and he would bring out Korn Kurls (1970’s Cheetos) or candy bars. After retirement, Bob never stopped coming to the Tavern, where you could find him playing the punch boards and giving away his prizes to his friends. 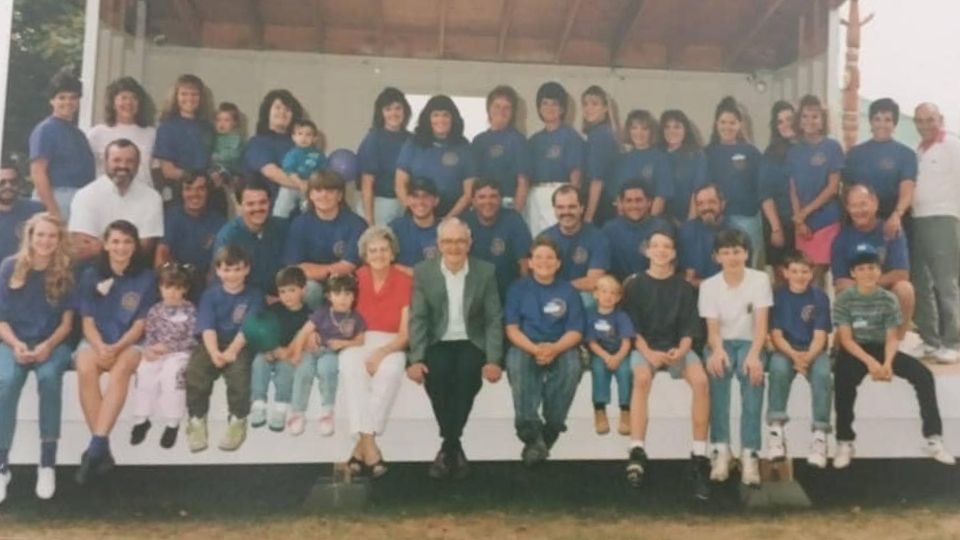 50th Wedding Anniversary for Bob and Inez Trimbo. The Tavern hasn't left the family since 1968. 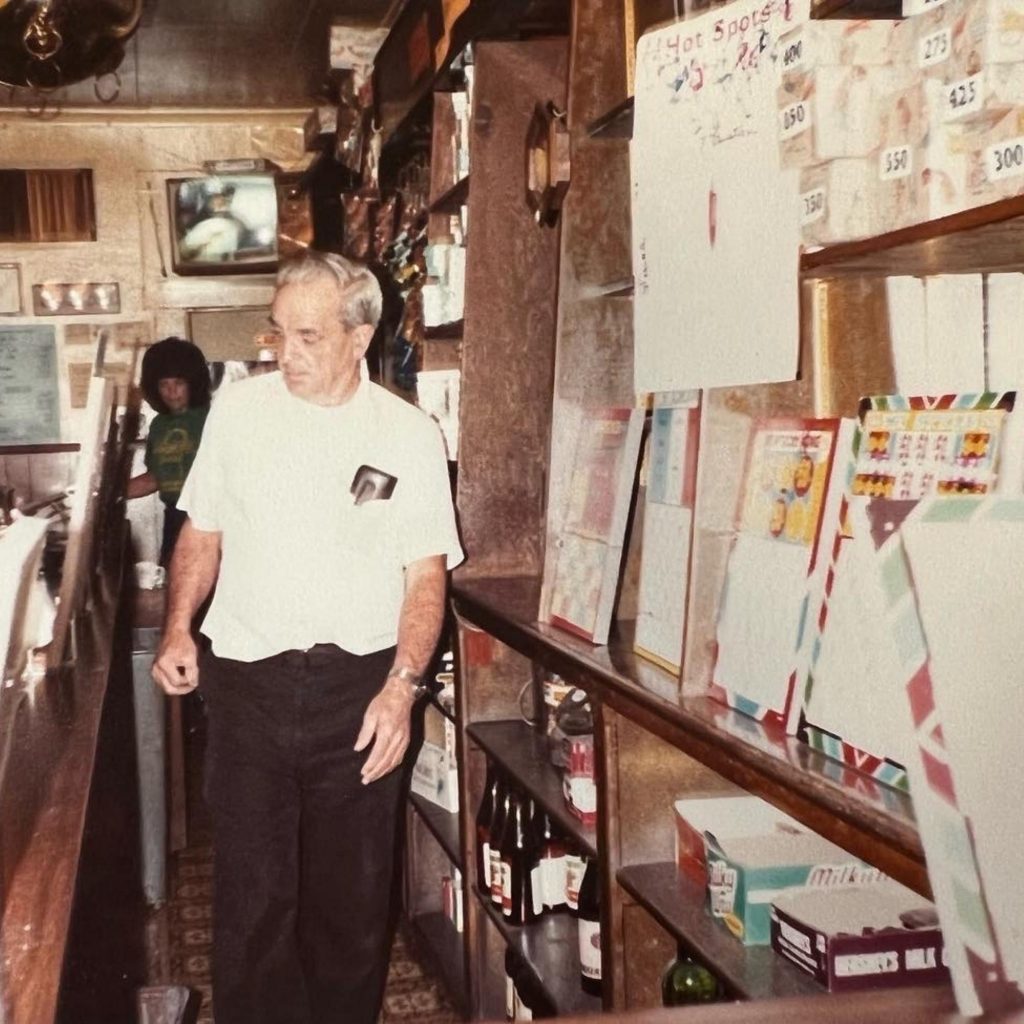 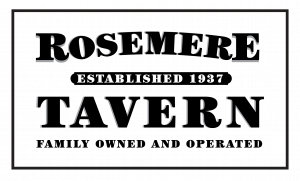 From One Generation to the Next

Barbara (Trimbo) Anderson purchased the Tavern from Bob Trimbo in 1980. Since then, 4 generations have worked in the Tavern and it remains in the family.

Matt is the third generation owner since 1968 and began here in October 2022. Matt is admired for his kindness, and his thoughtful considerate nature. He NEVER has a mean thing to say about anyone. He’s adored by his family and friends for his loyalty, love of family, quiet calmness, respectfulness and sense of humor. It has been said about Matt that he has a beautiful and kind spirit. Matt is committed to the continued success of Rosemere Tavern for his family, and customers 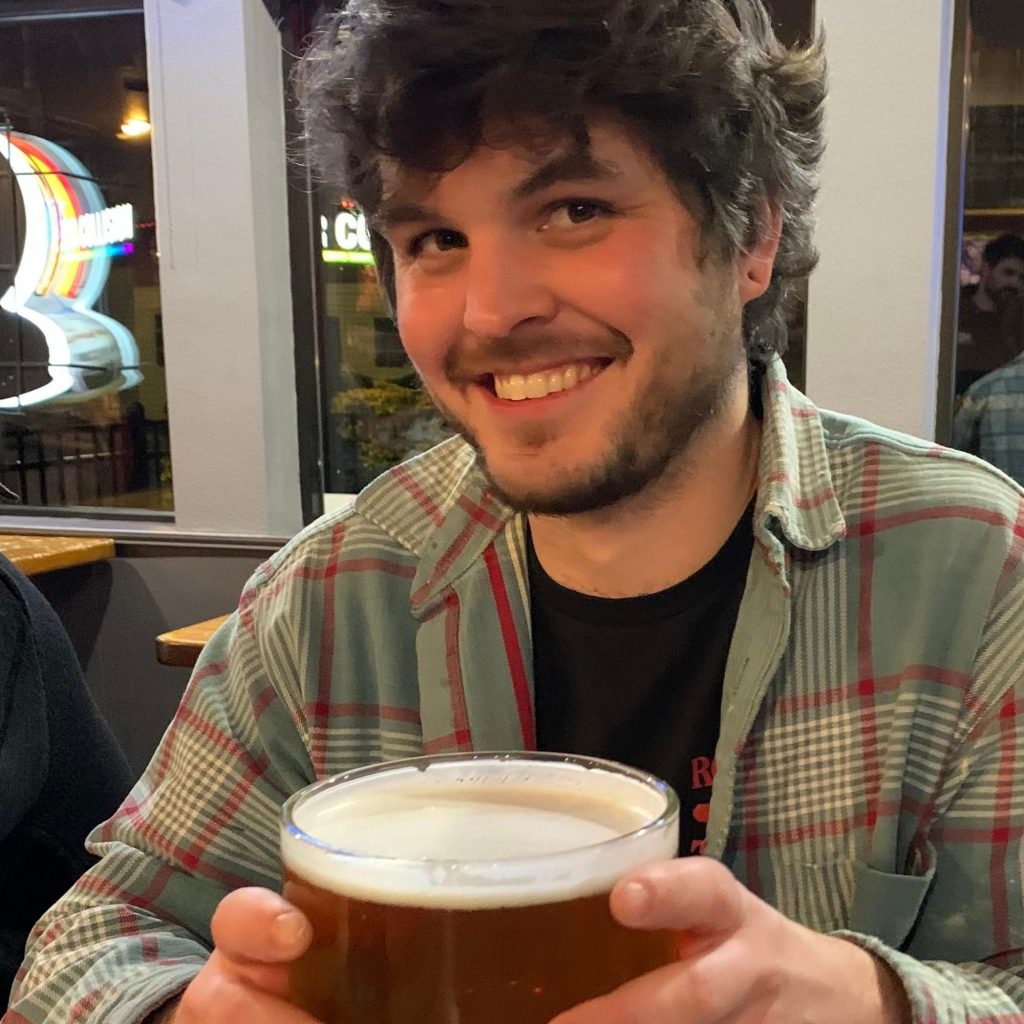 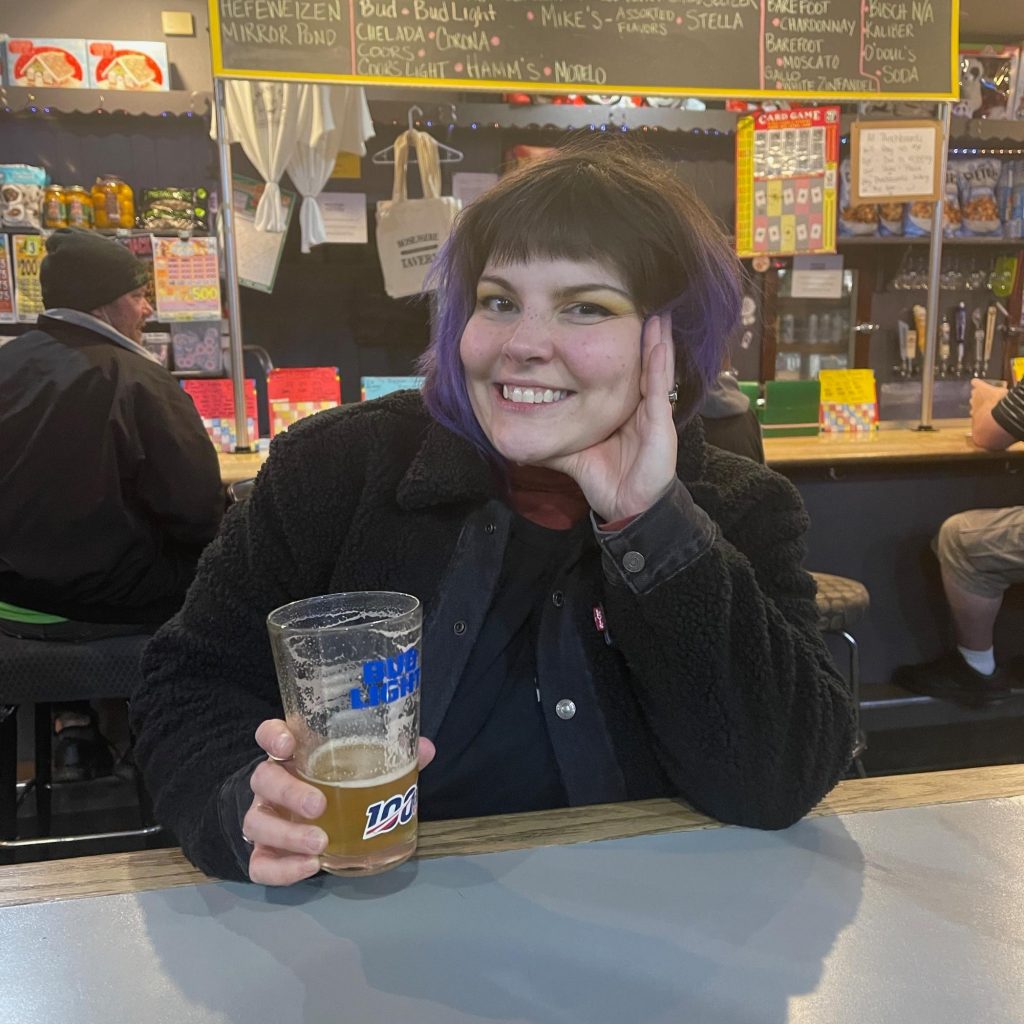 Caitlin is engaged to Matt and they have been together since high school.
Caitlin has an outgoing, fun personality with a big smile that lights up the room. She’s committed to giving customers a positive experience by creating a fun atmosphere.

Our manager, Nancy, is the late Barbara (Trimbo) Anderson's sister and worked with her for over 40 years. Nancy is known for her hard work and dedication to the success of Rosemere. She is also well-known in the community for her contagious laugh and generous spirit. Over the years, she has raised funds for the YWCA, Cascade Aids Project, Kamp KC, the Vancouver Children's Center, and most recently she collected school supplies and backpacks for our local elementary school. 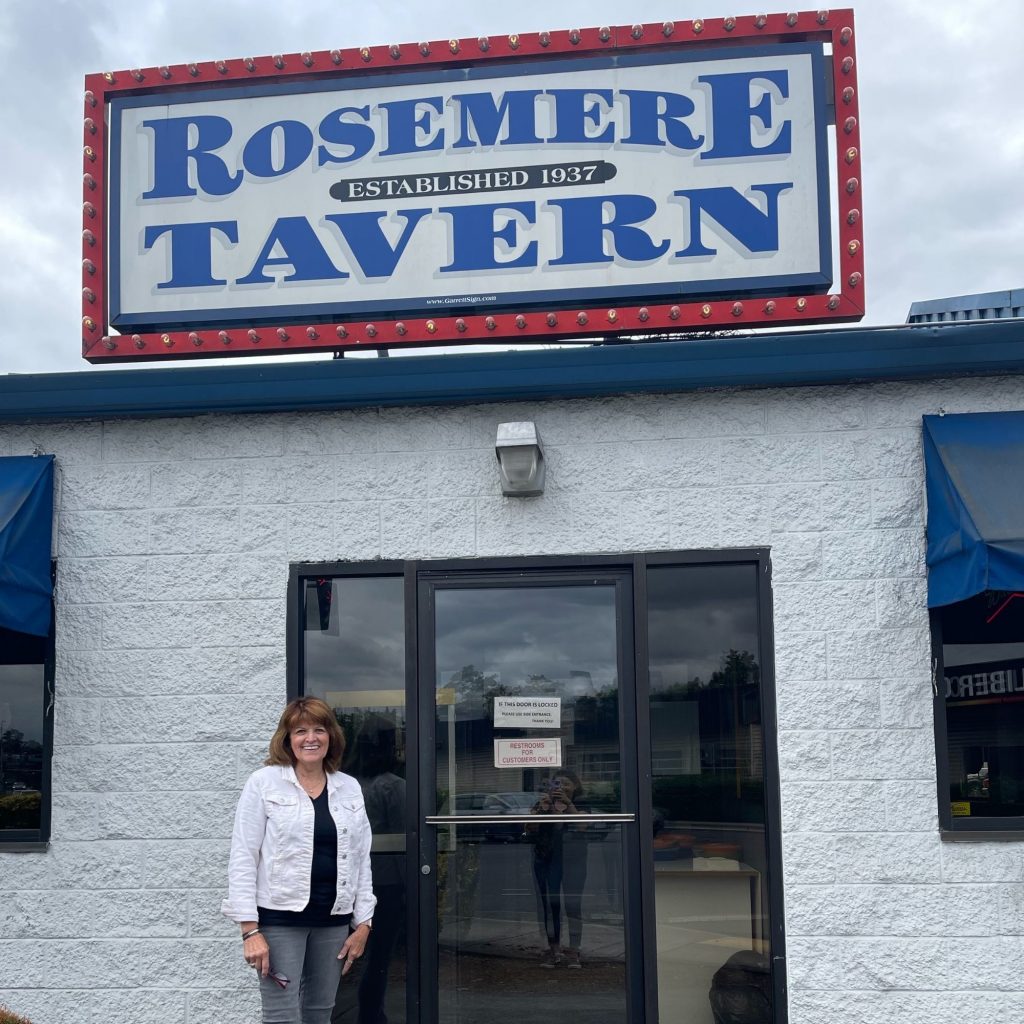 Matt and Caitlin in High School on the right and them at their tavern on the left. 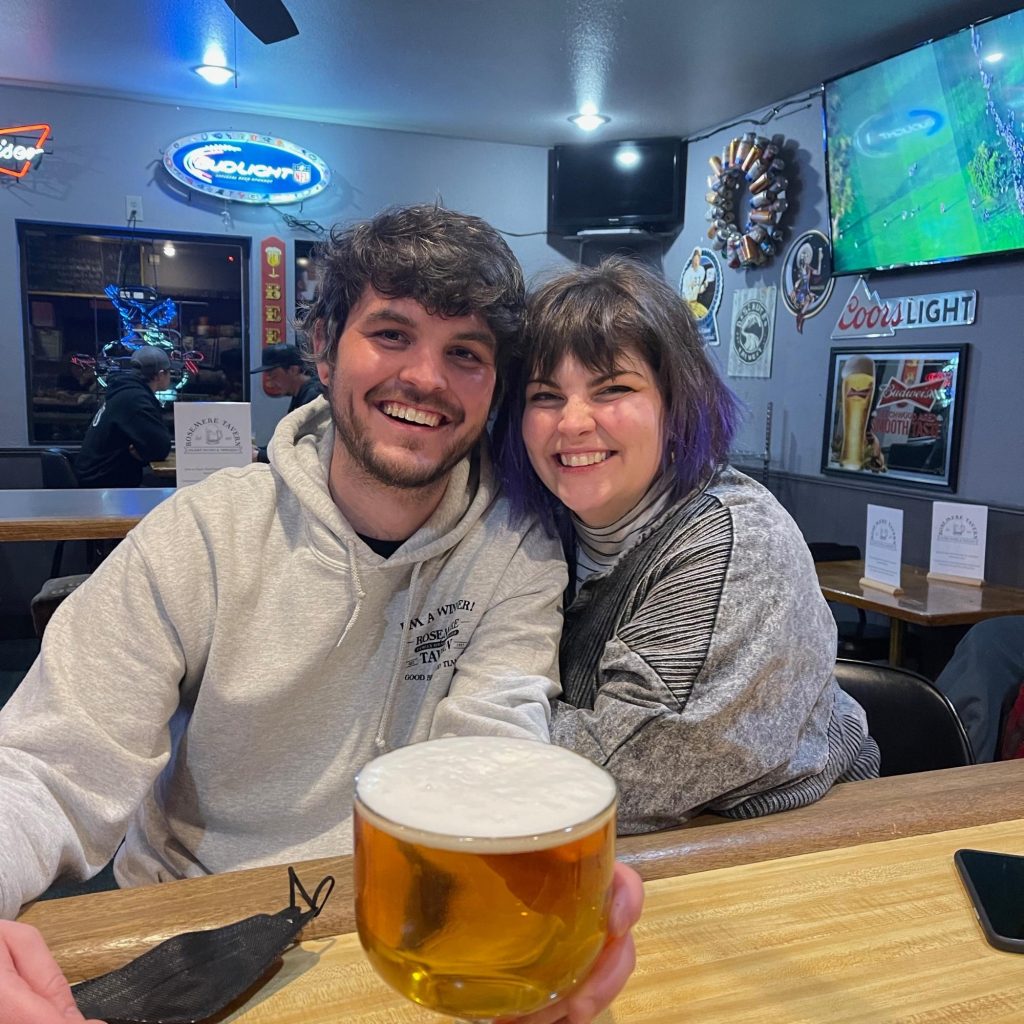 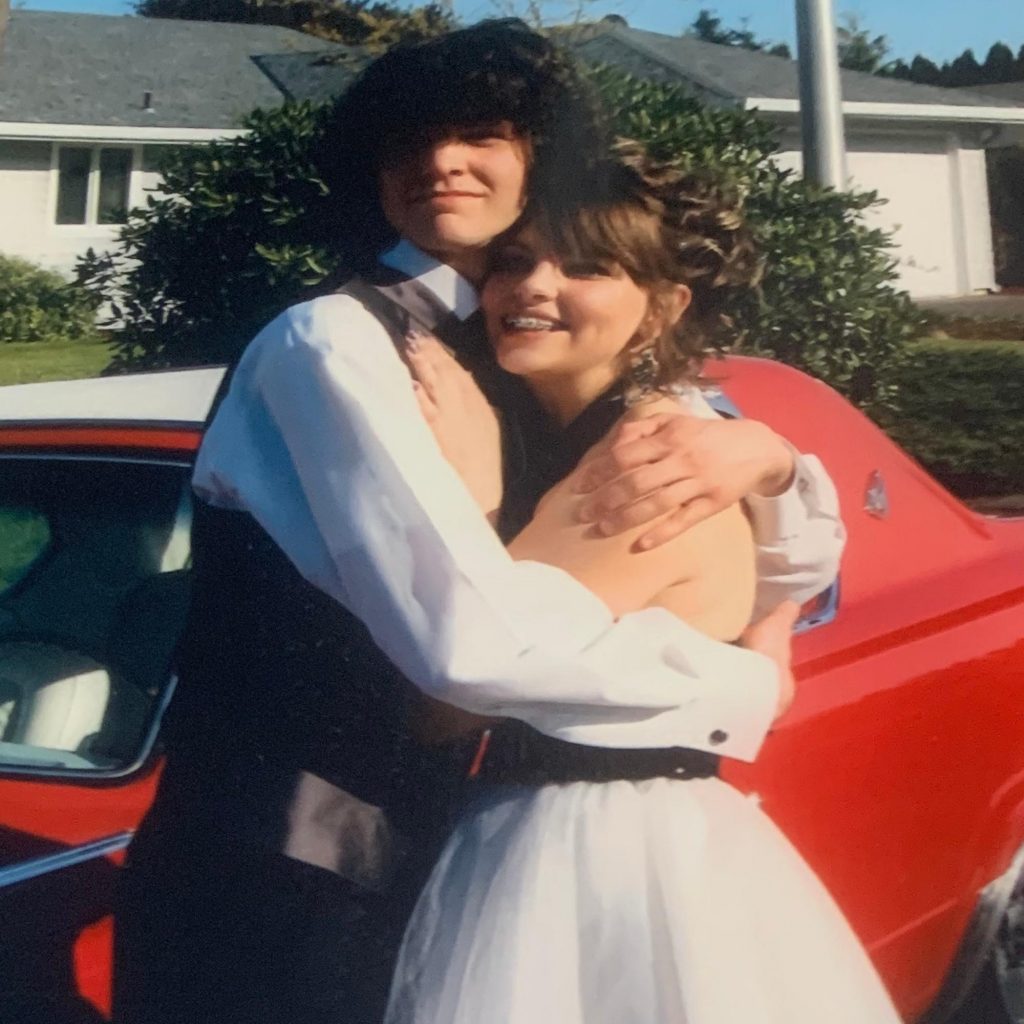 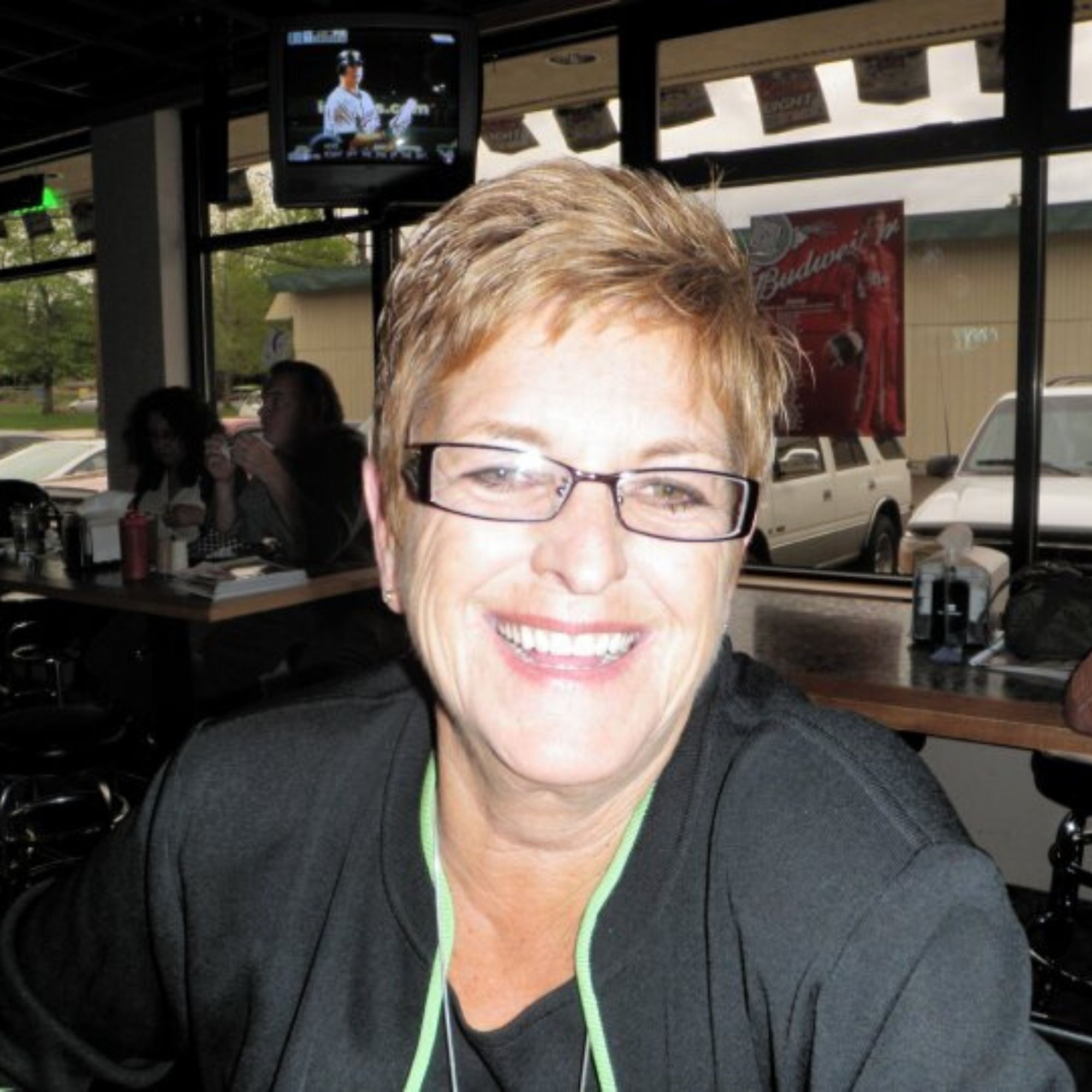 In Our Memory & Our Hearts

Barbara (Trimbo) Anderson was born on April 28, 1947 in Nicollet County, Minnesota and moved to Vancouver, Washington with her parents and big brother soon after. Clever and opinionated from a young age, Barb was the second child and first daughter of Bob and Inez Trimbo, and a trailblazer for her 10 brothers and sisters and the generations that followed.

Barbara owned and operated the Rosemere Tavern in Vancouver, Washington for more than 40 years. A skilled and determined business woman, she purchased the Rosemere from her father after his retirement in 1980 and ran it successfully through challenging times and times of plenty. Whatever Barb set her mind to, she could accomplish – with style, creativity, and smarts.

Memories of Barbara include her extraordinary generosity. She faced life’s challenges with strength, and she shared that strength with those in need. She provided shelter, employment in her business, dinners out for good food and company and learning how to cut a steak, funny and lovely birthday cards, an ear to listen and a shoulder to cry on, and beautiful baby gifts at every shower.

Barb was known for her wit, laughter, and love of family and friends. She made time for enjoyment and encouraged others to do the same. She had a full and active social life and loved to travel, golf, and play Yahtzee with her sisters. She was always on trend in styles that looked great on her, and she could find the humor in almost any situation.

Barb brought life and laughter to every occasion. She will always be remembered in our hearts for her fun-loving carefree spirit. 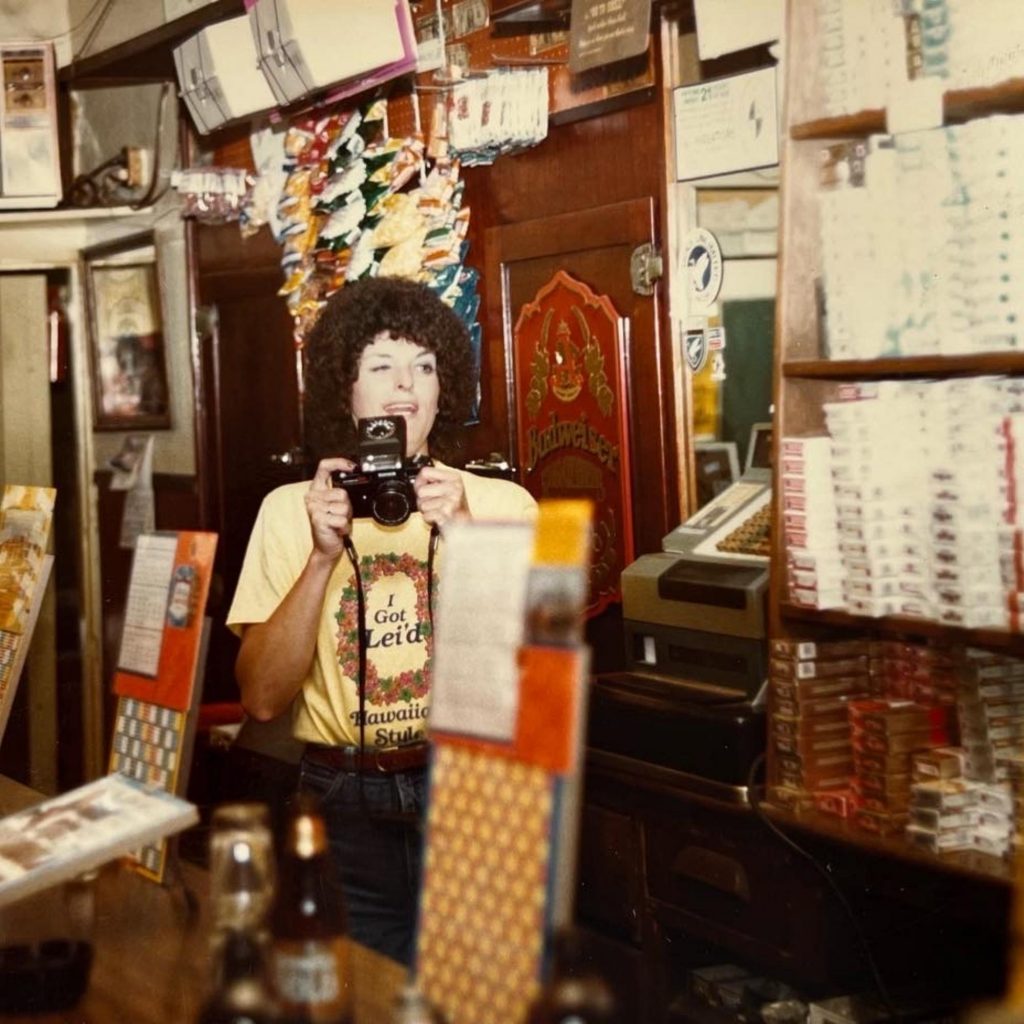 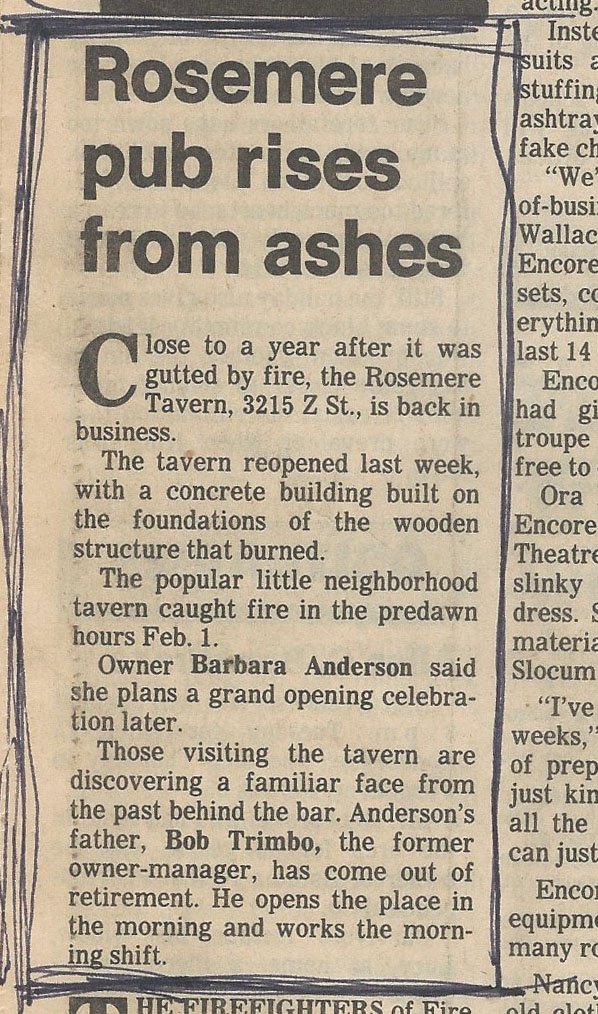 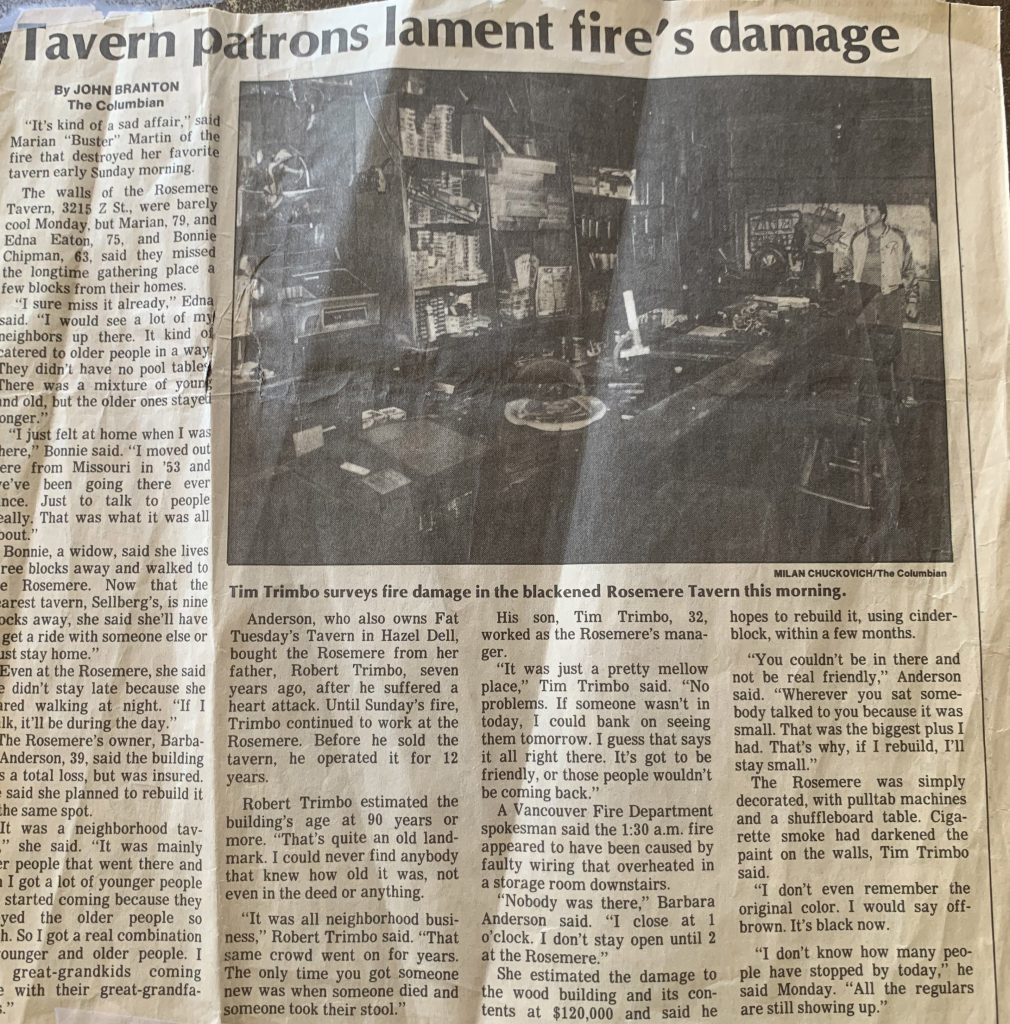 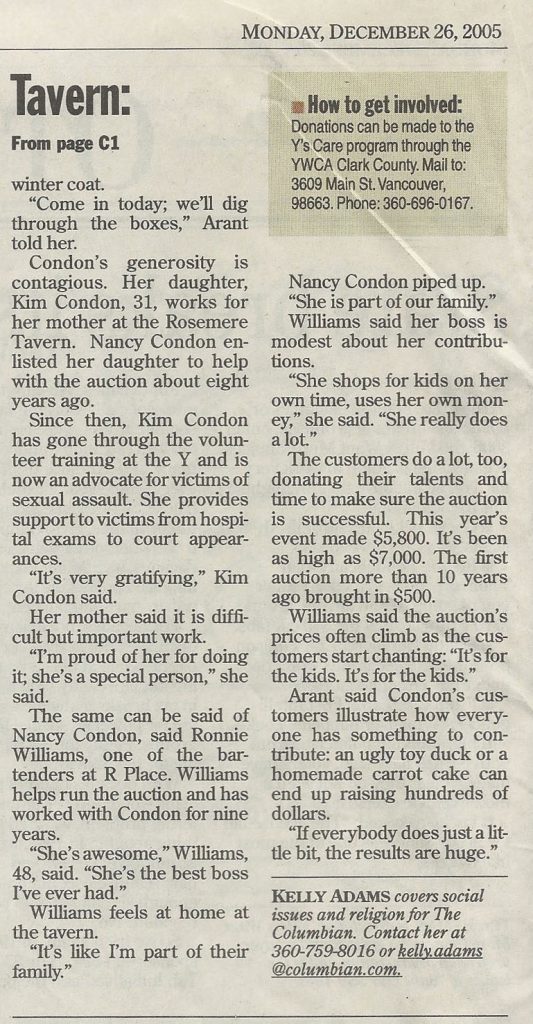 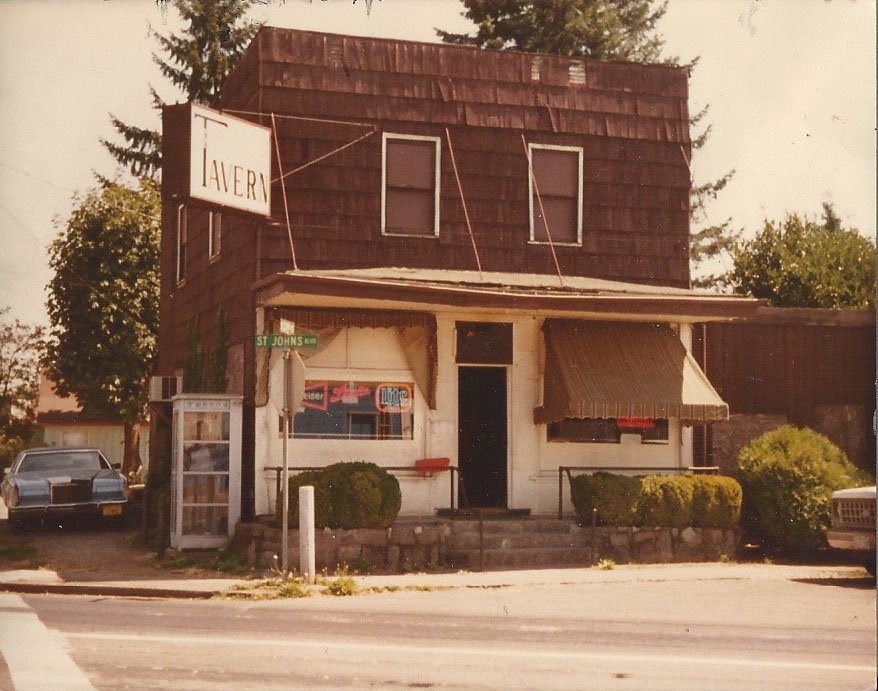 In 1986, Rosemere Tavern burned down. Robert (Bob) Trimbo estimated it was around 90 years old, but not even the deed on the property contained the age of the building. The Tavern was home to many regulars who were quoted above as feeling ‘at-home’ and welcomed by Bob, his son Tim, and his daughter, the Tavern’s owner, Barbara.  One year later, the Tavern was rebuilt and ready for grand opening. That is the building that now stands on the corner today. 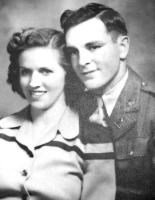 In Remembrance Of A Life Well Lived

Born in Henderson, Minnesota, on December 13th, 1917 to parents Michael Trimbo and Celia Doheny, Bob forged a life of ironic success and an unlucky addiction to challenges. Bob lost both parents at age 12, and was raised by his sister May. He performed his first miracle in overcoming the stigma Inez Mae Dressen had of him as being a “trouble-making friend of her brother’s,” and convinced her to go on a date with him, during which he purported to change a flat tire 4 times that evening. Bob joined the Army in 1941 and was stationed in Colorado Springs, where he married Inez on August 19th, 1942; he the age 24, she 20 years old. In reference to her, he frequently said he had never been single. She was the love of his life; they were married for 67 years until her passing in 2010.

World War II saw Bob placed into the Pacific Theater of combat, where he and several thousand other soldiers in tight quarters were deployed from Fort Lewis via ship and were greeted with rough seas several days later after dinner; it would be over 60 years later before he ate spaghetti again. During the Pacific campaign, Bob volunteered for a “dangerous and hazardous mission,” that evolved into the Merrill’s Marauders, a unit designed for jungle warfare against the Japanese in Burma. For his service, Bob was awarded the Bronze Star and the Combat Infantryman Badge. A movie starring Jeff Chandler would later be made loosely regarding the exploits of this unit, and when asked his thoughts of the movie’s accuracy, Bob offered only “I never saw any damn women in that jungle.” After the war, Bob’s return to the United States saw him through 48 hours of flying time that took him to stops in Iran, Egypt, Casablanca, the Azores and Bermuda, before returning to New York, circumnavigating the globe by 1944.

Returned to Inez, Bob and his wife had 11 children over the next 16 years. During this time, he delivered heating oil for the Scott’s Brothers until Bob purchased Rosemere Service Station in ’56, which later became Rosemere Towing with the purchase of their first tow truck in ’59. The toll of raising 11 children and working 7 very long days a week led to the eventual selling of Rosemere Towing, and the purchase of Rosemere Tavern. Bob was enchanted with the idea of having a guaranteed day off; at that time it was illegal for beer to be sold on Sundays. That particular law was changed 6 months later, returning Bob to a 7-day work week. He described this only as “his luck.” Bob had quit drinking years before purchasing the tavern, and through all the subsequent years he worked he never broke his sobriety. He sold Rosemere Tavern in 1979, “retiring” to a life of continuing to work and assist in the tavern for another 20 years, growing a magnificent 1.5 acre garden, and dedicating his service and devotion to his family.

The title of son, brother, soldier, employer, friend, father and husband paled to the mantle he would wear for the next 47 years with the arrival of his first grandchild. Bob, or forever after “Grandpa,” would go on to see his family swell to include 23 grandchildren, 23 great-grandchildren, and 5 great-great-grandchildren before his passing.

Bob smoked from the age of 7 to 65, and when confronted by his physician regarding his ailing health, he conceded he would not be able to break the addiction. He was informed if he continued smoking, he would not live to see his grandchildren grow up. “Grandpa” Bob never smoked another day in his life. He reaffirmed this the day before his passing, proudly stating that he never had another cigarette. Of his many occupations, no job suited Bob better than that of Grandfather. His long life of work, courage and self-sufficient determination was not lost on his family. He often left us in wonder of his character, and always made us laugh. He would do anything for his family, and loved the opportunities he had to help his grandchildren; teacher, mentor, chauffeur. As was his nature in any endeavor he chose, his love for his grandchildren was adamantly resolute. Bob was not a man for pity; he was stubbornly independent until his last day. He acknowledged he had no regrets, and his family was the proudest thing he had ever accomplished. In looking back to his early days in Minnesota, his response in wonder to whether or not he would ever make it this far was an ever familiar Bob quote, “Hell no.” As was his nature, he passed the way he wanted; in his home, with family, with no regrets.

We are better people for having known him, having had him in our lives, and our loss is tremendous in the wake of his passing.